Electrical conductivity (EC) is a robust indicator of soil salinity. In South Korea, EC of 1:5 of soil:water extracts (EC1:5) and soil saturated paste extracts (ECe) are often used. The standard shaking time is 0.5 hr for EC1:5 and standing time after soil saturation is 16 hrs for ECe. In this study, we investigated the effects of equilibrium time (shaking and standing time for EC1:5 and ECe, respectively) to test if the standard time is enough for precise and accurate measurement of EC. Two soils (silt loam and sandy loam) with seven levels of EC were prepared by adding salt solutions (1, 2, 4, 8, 12, 16, and 24 dS m-1) to the soils. The soils were used for experiments after 2-months aging. The EC1:5 was measured after shaking soil-water mixture for 0.5, 1, 2, and 3 hrs, and ECe was determined after standing the saturated soils for 4, 8, 16, 24, and 48 hrs. The results showed that 4 hrs of standing time for ECe are sufficient for most saline soils regardless of soil texture. However, occasional occurrence of large variations in ECe up to 25% indicates a necessity of longer (e.g., 24 hrs) standing time for some soils. Therefore, for long-term monitoring of ECe, it may be necessary to determine site-specific standing time for ECe. Unlike ECe, the variations in EC1:5 with shaking time was negligible. However, for soils treated with solution of high EC (24 dS m-1), the variability increased up to 6% variations. Therefore, it may be necessary to increase shaking time to 1 hr to ensure a precise measurement of EC1:5 particularly for high-saline soils.

For precise measurement of EC by achieving equilibrium of ions, shaking for 1 hr is required for EC1:5 and standing for 24 hrs is appropriate for ECe.

Electrical conductivity (EC) is a measure of soil salinity, and EC are measured in either soil-water extracts at a varying rate from 1:1 to 1:5 (Sonmez et al., 2008) or in soil saturated paste extracts (USDA, 1954). Measuring EC of soil extracts (ECsw) at varying soil-water ratio is easy, but field application of ECsw is limited as it does not reflect soil solution EC (Sonmez et al., 2008; Chi and Wang, 2010; Khorsandi and Yazdi, 2011; Aboukila and Abdelaty, 2017; Aboukila and Norton, 2017). The EC of saturated paste (ECe), which is the standard method, represents soil salinity which are experienced by plant roots. However, saturated paste extraction is criticized for being labor intensive and time-consuming, and for difficulty in determining the correct saturation point (Al-Busaidi et al., 2006). In addition, measurement of ECe is costly when the number of samples is high or frequent monitoring is required (Aboukila and Norton, 2017).

Though ECsw and ECe are widely used for soil salinity assessment, the details of the methods differ with countries. For example, shaking time for obtaining ECsw is 0.5 hr for South Korea (RDA, 2001) and 1 hr for USA (USDA, 1954). The standing time for ECe is 16 hrs for South Korea (RDA, 2001) and 24 hrs for USA (USDA, 1954). Therefore, it is necessary to investigate the effects of shaking and standing times on EC measurement to make sure that the current method (i.e., shaking and standing times) is appropriate across soil types and salinity levels. As clays have stronger affinity to cations than sands and dissolution of salts from highly saline soils may take a longer time, it was hypothesized that longer shaking and standing times may be required to dissolve salts from soil particles for fine-textured and highly saline soils compared to coarser-textured and less saline soils. To test the hypotheses, in this study, changes in EC with shaking time (for ECsw) and standing time (for ECe) were investigated using two soils (silt loam and sandy loam) with seven levels of EC.

Seven levels (1, 2, 4, 8, 12, 16, and 24 dS m-1) of salt solution were prepared by dissolving chemical grade (Junsei, Japan) salts (NaCl, NaNO3, CaSO4 ‧ 2H2O, KNO3, and MgCl2) in deionized water. At first, 24 dS m-1 solution was prepared by dissolving NaCl (5.1 g L-1), NaNO3 (5.1 g L-1), CaSO4 ‧ 2H2O (1.7 g L-1), KNO3 (1.7 g L-1), and MgCl2 (3.4 g L-1), and the lower saline solution was prepared by diluting the solution progressively with deionized water. The ionic compositions used in the present study were determined by considering the reported cations concentration for RTLs in South Korea (Lim et al., 2020). The soil and soil-sand mixtures were treated with 1,000 mL of the target salt solutions to super-saturate the mixture. The containers were placed in a room for 1 month to ensure homogenous distribution of dissolved salts in the soils. After 2-month aging, the containers were evaporated in drying ovens at 40°C to dryness for 7 - 10 days. The dried soils were passed through a 2-mm sieve.

Soil samples (10 g) in triplicates were placed into 100 mL plastic bottles and 50 mL of distilled water was added. The bottles were shaken at 150 rpm for different times (0.5, 1, 2, and 3 hrs). The soil mixtures were filtered through a filter paper (Whatman #42) to obtain soil extracts, and EC was measured with a conductivity meter (Orion 3 STAR, Thermo Fisher Scientific Korea, Seoul, Korea) (Rhoades, 1996).

Soil sample (300 g) was placed into a wide-mouth plastic container (470 mL) in triplicates. The pre-determined volume of the deionized water was added to saturate the soils, and mixed thoroughly with a spatula to make saturated pastes. After 4, 8, 16, 24, and 48 hrs of standing time, the pastes were extracted using a vacuum extractor (SampleTek 24VE. MAVCO INDUSTREIS, Inc. Kentucky, USA) to obtain extracts. The extracts were measured for EC using the conductivity meter.

For statistical analyses, data were tested for homogeneity of variance and normality of distribution with Levene’s test and Kolmogorov-Smirnov test, respectively. All data were found to be normally distributed with homogenous variances. The effects of equilibrium time on EC was assessed by analysis of variance (ANOVA). The effects of soil texture on EC were also explored using ANOVA, and the mean difference in EC between silt loam and sandy loam was estimated with a regression analysis of EC of silt loam and sandy loam. All statistical analyses were performed with the IBM SPSS Statistics 23 (IBM Corp., Armonk, New York, USA). Statistical significance was set at α = 0.05.

For both silt loam and sandy loam soils, there was no considerable variations in soil ECe with standing time (Fig. 1). There were some indications of changes in ECe with time for soils treated with solutions of EC 1, 2, 4, and 12 dS m-1 for silt loam soils and with solutions of EC 1, 2, and 4 dS m-1 for sandy loam soils. Though overall changes in ECe relative to 4-hr standing time were less than 5%, for both silt loam (Fig. 1-A(c)) and sandy loam (Fig. 1-B(c)) soils treated with solution of 4 dS m-1, ECe increased by 10 - 14% and by 8 - 25% with increasing standing time from 4 to 48 hrs. Therefore, our results indicate that 4 hrs of standing time are sufficient for measurement of ECe for most saline soils regardless of soil texture. As there was no consistency in the changes in ECe with standing time across the texture and EC levels, it was not possible to explain such a large variation for soils treated with EC 4 dS m-1 solution. However, the great variations in ECe up to 25% suggest that though the standard standing time is suggested to be 16 hrs for South Korea (RDA, 2001) and 24 hrs for USA (USDA, 1954), it is necessary to determine site-specific standing time for ECe needs for long-term monitoring of ECe. It has been suggested that standing time for ECe is affected by some soil properties such as type of salt present (Richard and Gouny, 1965) and gypsum content (Khorsandi and Yazdi, 2011). Changes in ECe of silt loam and sandy loam with standing time after soil saturation. Values are the means of triplicated, and small standard error bars are not often depicted. Different lower-case letters indicate that the values are different at α = 0.05.

Unlike ECe, changes in EC1:5 with shaking time (0.5 - 3 hrs) was found for only sandy loam soils with less than 6% variations (Fig. 2). Such negligible variation suggests that the Korean standard method (0.5 hr) (RDA, 2001) is reasonable. However, for sandy loam soils treated with solution of 24 dS m-1, 1 hr shaking increased EC1:5 by 5.7% compared to 0.5 hr shaking, indicating that shaking for 1 hr may be necessary for highly saline soils as recommended by USDA (1954). However, it is also cautioned that increasing shaking time may lead to overestimation of EC due to dissolution of salts from soil minerals. For example, calcium and sulfate ions may unnecessarily increase EC in soils containing gypsum and calcite (Hogg and Henry, 1984; Al-Mustafa and Al-Omran, 1990). Changes in EC1:5 of silt loam and sandy loam with shaking time. Values are the means of triplicated, and small standard error bars are not often depicted. Different lower-case letters indicate that the values are different at α = 0.05.

It is interesting to observe ECe of sandy loam soils were 61% (estimated from the slope of Fig. 3a) greater compared to that of silt loam soils despite that both soils received the same quantity of salts at the given EC levels. The difference in EC1:5 between soil textures was only 7% (Fig. 3b). Such a great difference in ECe should be attributed to difference in distilled water added to soils to saturate the soils; 119.4 mL for silt loam and 81.6 mL for sandy loam soils. This is because saturation percentage of coarser soils is lower than that of finer soils, resulting in ion concentrating effects (Kargas et al., 2018; Gharaibeh et al., 2021). 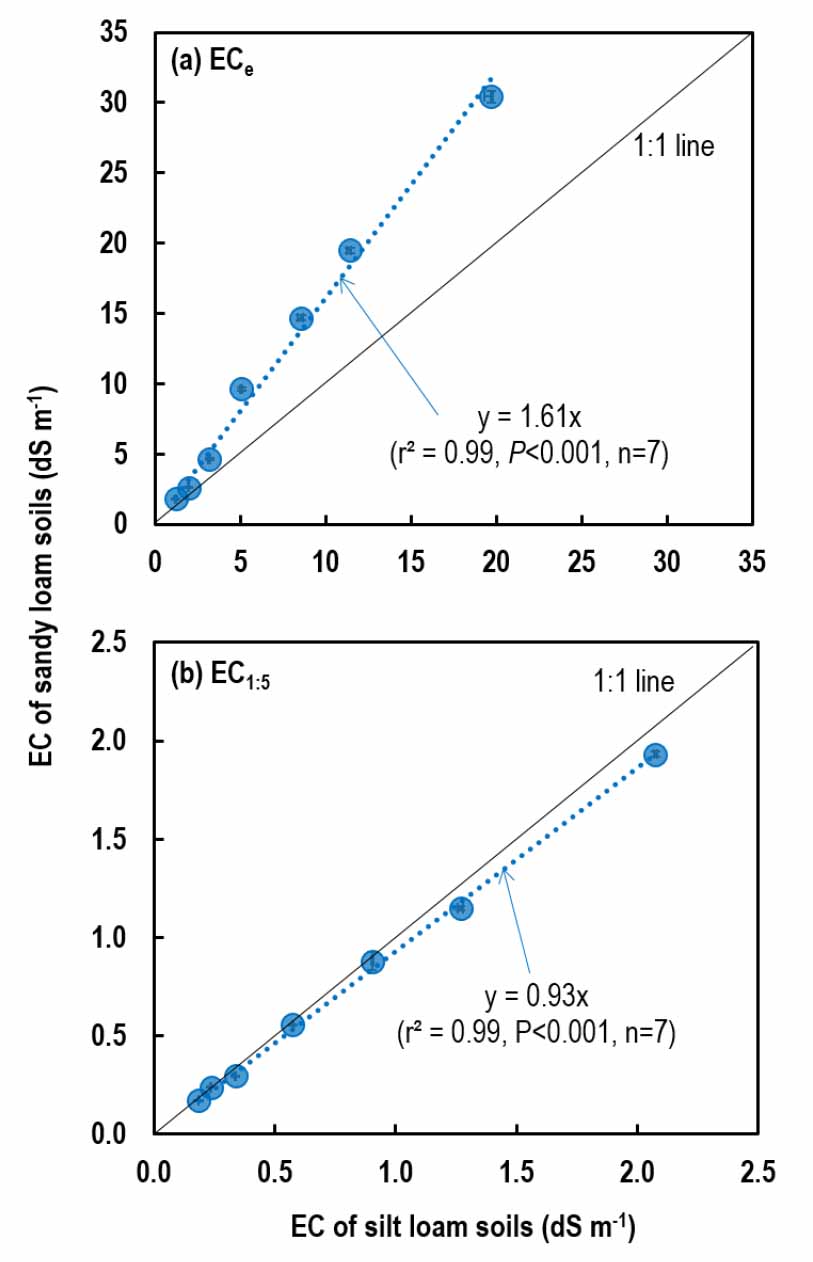 Relationship of EC between silt loam and sandy loam soils: (a) ECe and (b) EC1:5. Values are the means across four shaking (EC1:5) or five standing (ECe) time with triplicates (n = 12 for EC1:5 and n = 15 for ECe), and small standard error bars are not often depicted.

This work was carried out with the support of “Cooperative Research Program for Agriculture Science and Technology Development (Project No. PJ0138732021)”, Rural Development Administration, Republic of Korea. BSS and YJJ received scholarships from the Brain Korea 21 project (Education and Research Unit for Climate-Smart Reclaimed-Tideland Agriculture) of the Ministry of Education, Republic of Korea.