The stable carbon (C) isotope ratio (δ13C) of dissolve inorganic carbon (DIC) in environmental samples including soil extracts and water samples provides insight into the biogeochemical C cycling. The δ13C of DIC can be measured in gas and solid (carbonate precipitates) states, and precipitates measurement of δ13C of DIC is more convenient compared to the gases measurement for analyzing a large number of samples. However, it is still uncertain what precipitation conditions, such as pH, headspace, and distilled water, are suitable. To address the question, we conducted a series of precipitation experiments, followed by δ13C, under different conditions of pH, headspace, and distilled water as well as precipitating agents (SrCl2, BaCl2, and CaCl2). Our results demonstrated that DIC (depleted in 13C) contaminant in double distilled water is the major error factor to decrease the δ13C. By combining the results from the experiments, we suggest that reliable δ13C data can be obtained by precipitation under the conditions of using DIC-free tertiary distilled water, samples with a high DIC concentration, CaCl2 addition as a precipitating agent, pH 10.6, and the absence of a headspace produces a reliable δ13C measurement. 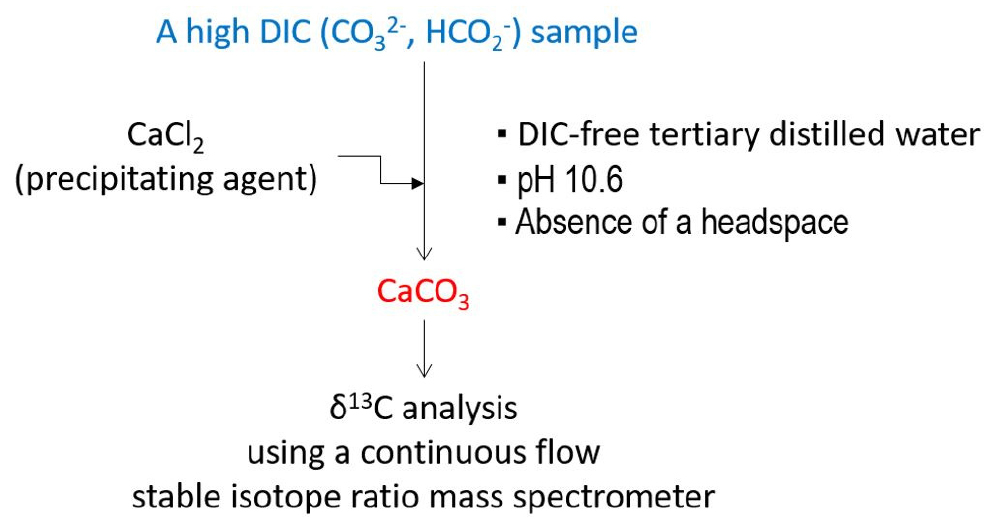 Methods and experimental conditions of DIC precipitation for the analysis of δ13C.

The stable carbon (C) isotope ratio (δ13C) of dissolve inorganic carbon (DIC), such as carbonate (CO32-) and bicarbonate (HCO3-), in soil extracts and water samples provides valuable information on the sources and biogeochemical C cycling (Atekwana and Krishnarmurthy, 1998). The natural background value of δ13C in uncontaminated environment (e.g., groundwater) ranges from ‒15‰ to ‒6‰ (Arneth and Hoefs, 1988; Mook, 2000; Grossman et al., 2002). However, increases in carbon dioxide (CO2) in soil and water environment through aerobic decomposition of C3 organic matter (around ‒27‰) leads to decrease in the δ13C of DIC (Breukelen et al., 2003). Under anaerobic fermentation conditions, however, the evolved CO2 is enriched in 13C (range: between ‒10 and +20‰) due to 13C isotope fractionation during methane (CH4) generation, which produces 13C-depleted CH4 (range: ‒110 and ‒50‰) (Grossman et al., 1989; Conrad, 2005; Mohammadzadeh and Clark, 2011; Wimmer et al., 2013).

There are typically two methods available for the measurement of δ13C of DIC; 1) gases DIC (i.e., CO2) extraction after acidification of the sample solution followed by direct injection of CO2 into stable isotope ratio mass spectrometer (SIRMS) (Atekwana and Krishnamurthy, 1998) and 2) precipitation of DIC as divalent metal-carbonate complexes followed by running on SIRMS equipped with elemental analyzer (EA) (Harris et al., 1997; Wimmer et al., 2013). Traditionally, the gaseous measurement δ13C of DIC requires a special headspace gas collection line, and thus it is not feasible for a large number of samples (Gillikin and Bouillon, 2007; Torres et al., 2005). Meanwhile, measurement of δ13C of DIC in precipitates using EA-SIRMS allows a direct combustion of the precipitates to liberate CO2 into SIRMS through continuous gas flow; therefore, it is a more convenient method compared to the gases measurement for analyzing a large number of samples (Harris et al., 1997).

The carbonate precipitates for the analysis of δ13C of DIC are obtained by reacting the sample solution with addition of CaCl2, BaCl2, or SrCl2 after raising the pH to shift the carbonate equilibrium (H2CO3 ↔ HCO3- ↔ CO32-) to the right, which facilitates the formation of carbonate precipitates such as CaCO3, BaCO3, and SrCO3 (Szynkiewicz et al., 2006). However, the effects of 1) pH adjustment (uncontrolled pH vs. raised pH) of the sample solution, 2) headspace (presence vs. absence of headspace) in the precipitation vessels, and 3) DIC in distilled water on the accuracy of the measurement of δ13C of DIC are not clearly investigated yet. As the contamination of the sample with atmospheric CO2 and CO2 dissolved in distilled water (δ13C below ‒10‰) in laboratories are critical concerns of the precipitation procedure, these factors need to be investigated.

This study was conducted to advance the carbonate precipitation method for precise analysis of δ13C of DIC by addressing the pH, headspace, and distilled water issue as mentioned above. We hypothesized that 1) raised pH may facilitate carbonate precipitation but it may fix atmospheric CO2, resulting in a lowered δ13C, 2) the presence of headspace may also lower the δ13C due to contamination by atmospheric CO2 depleted in 13CO2, and 3) DIC in distilled water may also contribute to the erroneous measurement of the δ13C.

In this experiment, we did not conduct mutual exclusive experiments by setting paired experiments to investigate the effects of pH, headspace, and distilled water separately. Rather than, we started the experiment following the results of Harris et al. (1997), who reported that SrCO3 is more suitable for analysis the δ13C of DIC compared to BaCO3 and CaCO3. However, unfortunately, we have not obtained reliable results, and thus we tested the potential factors such as pH, headspace, and distilled water sequentially through a series of three experiments to achieve a reliable procedure (Table 1). All experiments were replicated three or five.

Summary of experimental conditions for analysis of the δ13C of dissolved inorganic carbon (DIC).

The concentration of dissolved inorganic (DIC), organic (DOC), and total carbon (TC) of distilled water used in the experiments.

Values are the means with standard errors (n=3) in the parentheses.

In the Experiment 1 (Table 1), all the chemical reagents were prepared in double distilled water, and the mixture of SrCl2 (2 mL) and BaCl2 (2 mL) was used as a precipitating agent for each experiment vessel containing Na2CO3 solution. Initially, we have added 4 mL of SrCl2 to the vessel, but precipitates were not formed, and thus we used the mixture of SrCl2 (4 mL) and BaCl2 (4 mL), which produced visible precipitates immediately after the addition. The Na2CO3 solution (200 mL) were transferred into a 250-mL centrifuge bottle (total volume was 282 mL) and the precipitating agent (4 mL) and 1 N NaOH (2 mL) was added. Therefore, there was approximately 76 mL of headspace (including bottle top space) in the bottle. The number of samples was 10 (two levels of Na2CO3 solution × five replicates).

The centrifuge bottle containing the samples were left at room temperature for 7 days to allow precipitation. The precipitation time was longer than 2 days (Bishop, 1990) and 6 days (Szynkiewicz et al., 2006) recommend by others. The bottles centrifuged at 5,000 rpm for 10 minutes, and a portion of supernatant (20 mL) was collected and the remaining was discarded. The precipitates were washed again by adding the corresponding precipitating agent (50 mL) followed by centrifugation.

The collected supernatant samples were analyzed for DIC concentration using the TOC analyzer. The precipitates were transferred a 50-mL conical tube, and dried under infra-red lamp. The dried precipitates were crushed to fine powder using a spatula. The δ13C of the powder was analyzed using the SIRMS.

The recovery of carbonate (CO32-) in precipitates (i.e., precipitation efficiency) was calculated as

where DICi and DICs are the concentration of DIC in the initial solution used and in the supernatant solution after precipitation reaction, respectively.

Experimental data were tested for homogeneity of variance and normality of distribution with Levene’s test and Kolmogorov-Smirnov test, respectively, and results showed that the variance was homogeneous and the distribution was normal. The effects of experimental treatments (e.g., DIC level and pH adjustment) were assessed with the analysis of variance (ANOVA) using the general linear model using the IBM SPSS Statistics 23 (IBM Corp., Ammonk, New York, USA) (Table 4). When ANOVA is significant, pairwise comparisons of the means were conducted using the Duncan’s multiple range test. Statistical significance was set at α=0.05.

Across the Experiments 1‒3, the precipitation efficiency was greater under high DIC concentration (Fig. 1 and Table 3) due to increased precipitation reaction through nucleation and crystal growth (Montes-Hernandez et al., 2009). An increase of pH from 10.2 to 12.2 in the Experiments 2 and 3 obviously increased the precipitation efficiency through a shift of carbonate equilibrium (H2CO3 ↔ HCO3- ↔ CO32-) to the right (Szynkiewicz et al., 2006; Lim et al., 2012). Therefore, these results suggest that precipitates yield of DIC may be more efficient for samples with a high DIC concentration and by addition of SrCl2 and BaCl2 rather than CaCl2. 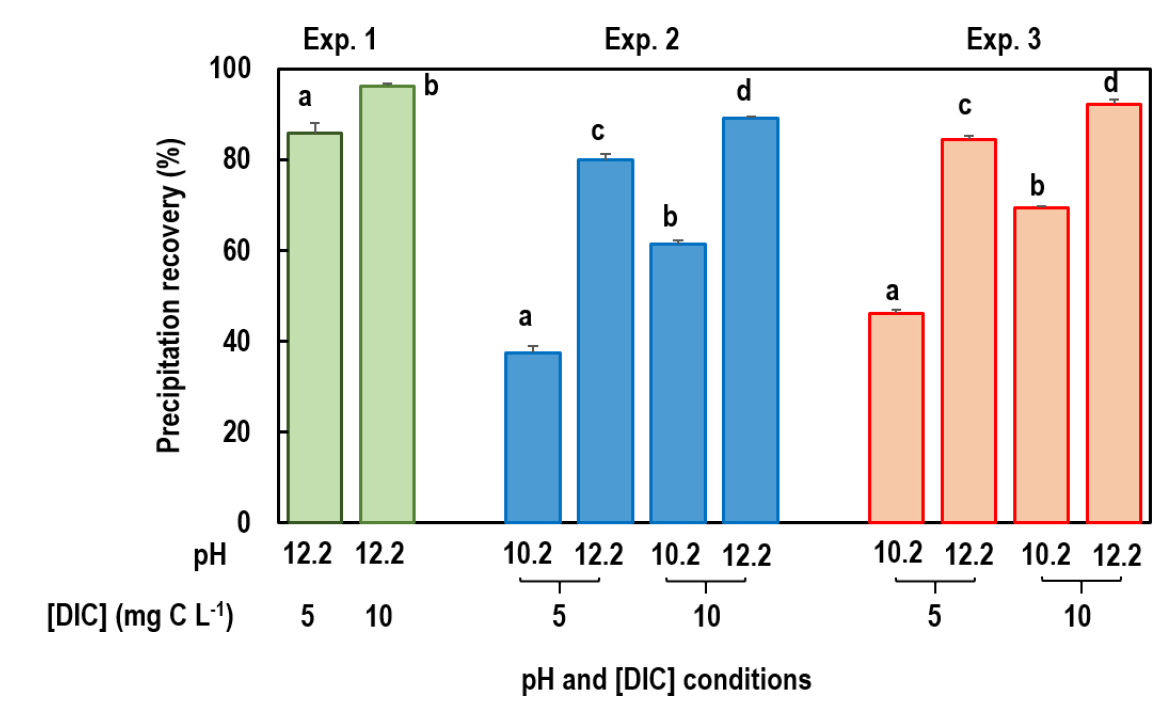 Recovery of carbonates in the precipitates (precipitation efficiency) under different experimental conditions. Vertical bars are standard errors of the mean (n=5 for Experiment 1 and 3 for Experiments 2 and 3). Different lowercase letters indicate that the means are statistically different among the treatments within each experiment (see Table 2).

The results (P value) of analysis of variance on the effects of DIC level and pH adjustment on the recovery of carbonate in precipitates (precipitation efficiency) for three experiments.

Details of the experiment are described in Table 1.

†Not applicable as pH adjustment was not included in the treatment.

Though the precipitation efficiency was high enough for the Experiment 1, the δ13C of the SrCO3·BaCO3 was negative by more than 9‰ compared to the reference (‒7.45‰) (Fig. 2). In addition, the δ13C was not affected by DIC concentration (Table 4). Such errors could be ascribed primarily to the effect of 13C-depleted atmospheric CO2 remained in the headspace and dissolved in the double distilled water as previously mentioned; Szynkiewicz et al. (2006) reported that the δ13C of contaminant DIC was ‒24.3‰. It may be also possible that the requirement of a high temperature for thermal decomposition of SrCO3 and BaCO3 causes C isotope fractionation, which produces 12CO2 faster than 13CO2 (Harris et al., 1997). Weast (1973) reported that thermal decomposition of SrCO3 and BaCO3 occurs at 1,100 and 1,300°C, respectively, while CaCO3 thermally decomposes at 830°C.

The results (P value) of analysis of variance on the effects of DIC level and pH adjustment on the δ13C of carbonate in precipitates for three experiments.

Details of the experiment are described in Table 1.

†Not applicable as pH adjustment was not included in the treatment.

In the Experiment 2, which was conducted by addition of CaCl2 as a precipitating agent using double distilled water in the absence of a headspace, however, the precision of δ13C measurement was not improved (Fig. 2). This result strongly suggests that DIC dissolved in the double distilled water is the main reason of the poor precision of δ13C analysis. In the Experiment 3, which was conducted using tertiary distilled water under the same experimental conditions as the Experiment 2, the precision of δ13C measurement was greatly improved. The differences in the δ13C between the reference and the precipitates was less than 1.0‰, and the δ13C of the precipitates produced from the solution with a high DIC concentration (10 mg C L-1) by adding CaCl2 without pH adjustment (pH=10.6) in the absence of a headspace was the same as that of reference (Fig. 2). The slightly decreased δ13C of precipitates under a high pH (12.6) should be ascribed to the interference of the contaminant DIC from atmosphere; Szynkiewicz et al. (2006) reported that δ13C of DIC decreased by 0.03, 0.07, and 0.22 at pH 10.26, 11.38, and 12.11, respectively. Therefore, these results together with the precipitation efficiency data imply that pH increases may facilitate DIC precipitation, but there is a possibility of DIC contamination. 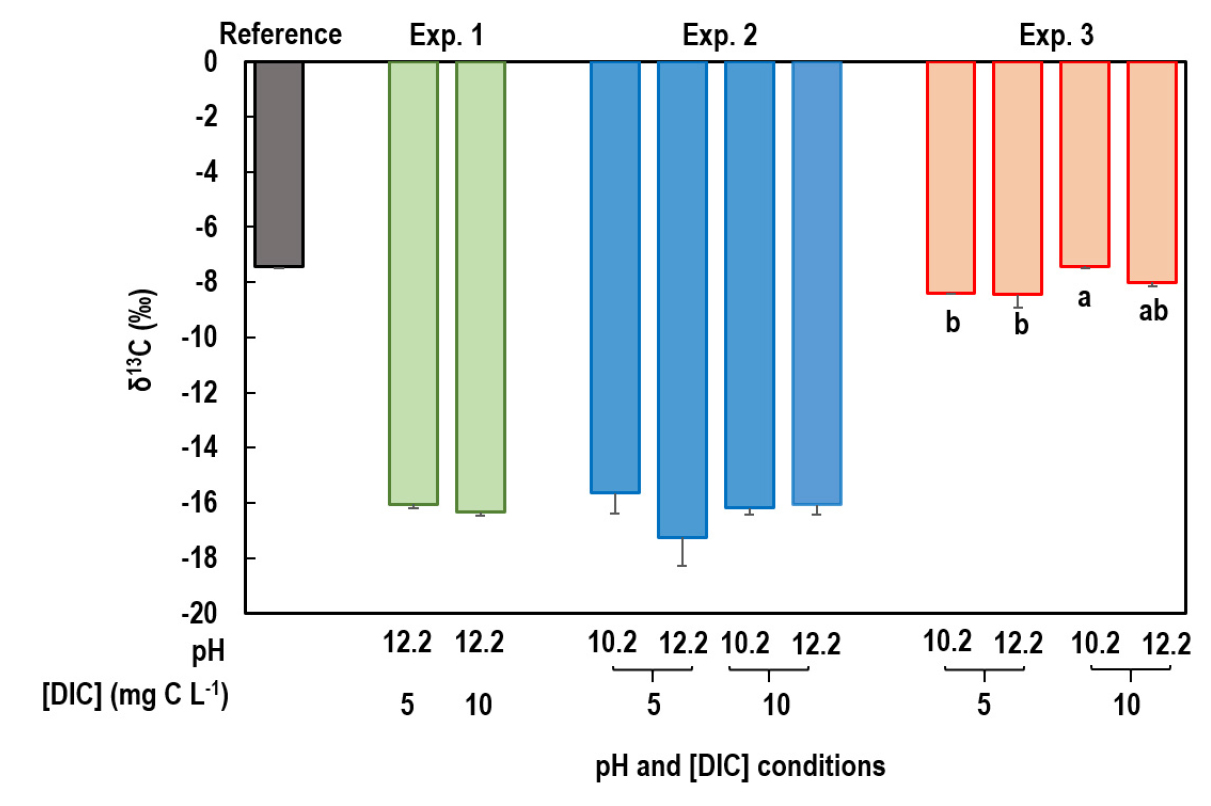 Our results showed that DIC contaminant in double distilled water may cause unacceptable errors in the analysis of δ13C of DIC, highlighting the strong necessity of using DIC-free tertiary distilled water. In this context, though not directly examined in the present study, CO2 in a headspace may also cause similar errors. However, as the effects of pH, headspace, and distilled water on the precision of δ13C analysis were not systematically investigated in the present study, we still lack of data on the quantitative errors caused by the conditions of pH, headspace, and distilled water for precipitation. Nevertheless, our results clearly showed that precipitation conditions for reliable δ13C measurement are DIC-free tertiary distilled water, samples with a high DIC concentration, CaCl2 addition as a precipitating agent, pH 10.6, and the absence of a headspace.

This work was carried out with the support of the “Cooperative Research Program for Agriculture Science and Technology Development (Project No. PJ015010022020)”, Rural Development Administration, Republic of Korea. YJJ received scholarships from the BK21 project (Education and Research Unit for Climate-Smart Reclaimed-Tideland Agriculture) of the Ministry of Education, Republic of Korea.